Use a Virtual Machine that consumes less memory

The first option would be to run your Java applications on a Virtual Machine that consumes less memory. If you attempt to download the latest release of Java from AdoptOpenJDK, you will notice that two different flavors are available, with each one of them using a different Virtual Machine (VM):

According to its official page, OpenJ9 has a smaller footprint compared to HotSpot: "Immediately after startup OpenJDK 8 with OpenJ9 showed a footprint size about 66% less than OpenJDK 8 with HotSpot."

This claim sounds rather promising, so I thought of conducting an experiment by running the well-known application Spring-PetClinic with OpenJ9 and HotSpot, aiming to measure its memory footprint with each VM. For this experiment, I have built my own Docker images, which are based on AdoptOpenJDK's images of Alpine Linux.

As shown in the following chart, my experiment with Spring-PetClinic confirmed that OpenJ9 consumes significantly less memory than HotSpot. Particularly, in OpenJDK 8 and11, OpenJ9 has a footprint size about 71% and 54% less, respectively, than HotSpot. 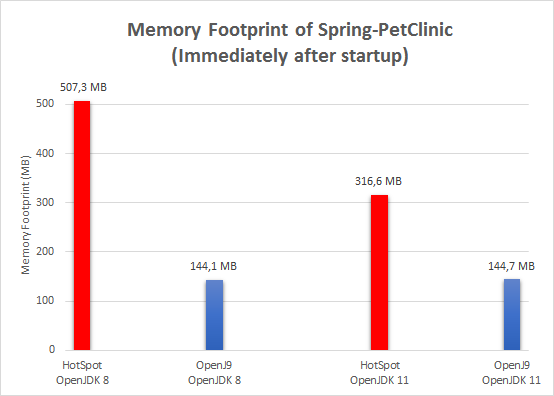 Clearly, the memory savings achieved by OpenJ9 are impressive. But, if you have got only one instance of your Java application running on the cloud, then migrating from HotSpot to OpenJ9 may not result in any noticeable savings in your cloud bill. Only if you have tens or hundreds of application instances on the cloud, should you consider migrating to OpenJ9 to achieve significant cost savings.

If for any reason you wish to keep running your applications on HotSpot, and are still stuck with Java 8, then it is likely worth investing the development effort to migrate your application to Java 11. The expected, reduced memory footprint of your application in OpenJDK 11 with HotSpot will yield cost savings that can pay off for the migration effort from Java 8 to Java 11.

Configure your Virtual Machine to use Class-Data Sharing

Class-Data Sharing (CDS) is a feature available in both HotSpot and OpenJ9 that can improve the startup time of your Java application and reduce its memory footprint. 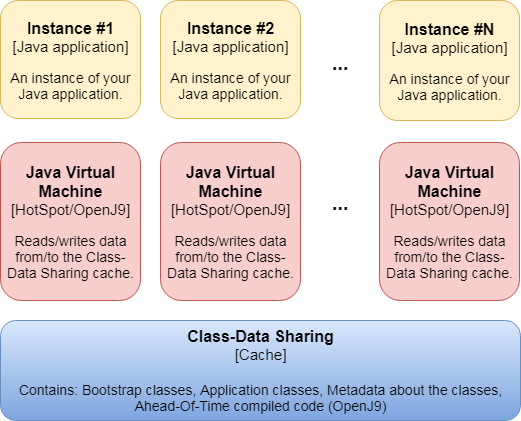 Indeed, my experiment verified that when running Spring-PetClinic on OpenJDK 11-OpenJ9 with Class-Data Sharing (CDS) enabled: 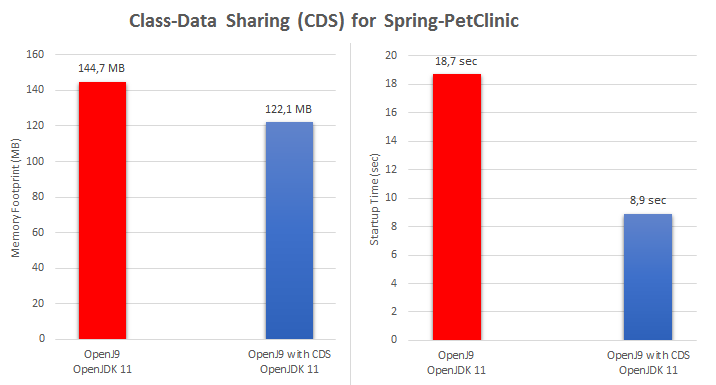 Clearly, if you have several instances of your Java application (or similar Java applications) running on the same host, and/or must frequently startup new instances, then you may benefit from the savings achieved in memory footprint and startup time by Class-Data Sharing. Remember that the more time it takes for your application to startup, the more you will be charged by your cloud provider for the consumed resources (CPU per hour).

Minimize the Docker images of your application 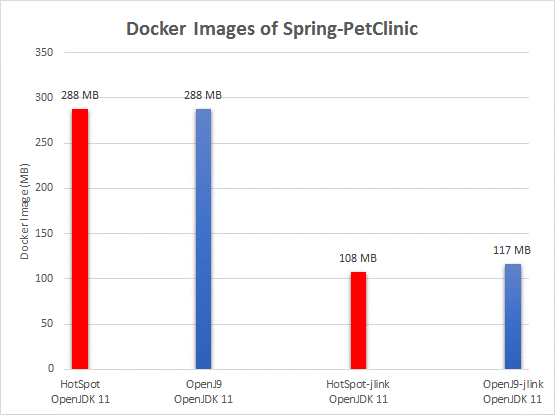 Moreover, the reduced size of Docker images will allow for faster startup of new instances, as you scale out your Java application.

Keep an eye on the costs of your application

Finally, the hardest part is to continuously track your cloud costs, being able to reason about the individual costs of your cloud application:

Should you wish to run this experiment yourself, feel free to use my Docker images: https://hub.docker.com/r/ikolaxis/evaluate-java-virtual-machines

Alternatively, you can reuse my Docker files, and adapt them for your experiments: https://github.com/ikolaxis/evaluate-java-virtual-machines

VIEW ALL POSTS BY Ioannis Kolaxis
Software Engineer, Atos Senior Digital Expert
Ioannis Kolaxis is a Software Engineer at Atos Greece, developing innovative software products for Unified Communication and Collaboration (UCC). He enjoys learning new stuff, and playing with new technologies, firmly embracing Socrate's quote: "I know one thing: that I know nothing". He is a speaker at local meetups, such as the Java Hellenic User Group (Athens, Greece), and Thessaloniki Java Meetup (Thessaloniki, Greece). He frequently writes articles on LinkedIn and Developer Zone, focusing on Software Engineering topics, like Java and Software Quality. He participates in the Internet Engineering Task Force (IETF). He is certified as a European Professional Engineer (EUR ING), and a Professional Scrum Master (PSM I). In 2017, he was awarded by Atos with the title of "Senior Digital Expert", as a recognition of his technical expertise and professional accomplishments.