Planet Internet – the Internet of Things and Home Automation

There are nearly 2.5 billion people online now, and on average we have 2.8 devices each. Mobile access to the Internet accounts for an increasing proportion of traffic and more and more of the world’s population will join, in one form or another, over the next few years. How amazing that the majority of the human species (an expected 5 billion) will be connected through the planetary Internet. 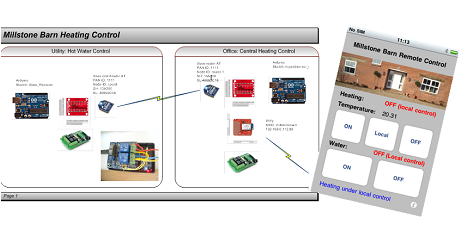 But it's not just people. I have almost exhausted my Class C[1] subnet at home with a variety of real, physical, devices; from computers, to phones, to televisions and music players … and a bunch of virtualised ones - I am sure many of our readership have similar computer labs with vast virtualised architectures for testing, developing and simulating high performance complex systems. Okay, perhaps not - maybe it's just me.

More and more devices are joining Planet Internet though. Smaller computers like the Arduino and Raspberry Pi (a million of these have been made already); but an order of magnitude larger, a variety of "embedded" devices too. Everything from light bulbs, street furniture, cars (and components within those cars) to fridges to wearable apparatus and clothing. This week I also saw a Facebook-connected drinking cup; befriending online by clinking. Perhaps even product packaging next. An IP address for everything we dispose of (for tracking recycling processes)? We call this the Internet of Things (IoT). Amongst these we could include connected thermometers too ...

And on that topic, some time ago I wrote a white paper to share my own IoT explorations with my Atos Scientific Community colleagues. I wanted to connect my home heating system and thermostat to the Internet so that I could control it whilst I was out and about ... or still in bed. It’s too long to reproduce in full in this posting, but can be found attached to the article, and I wanted to share it with you now whilst it's still relevant ... and in particular before the commercially available Nest Thermostat makes it into UK retailers. These projects require a combination of hardware, software and online services all working in concert to address the requirements and create value. In this case the project involved Arduino, XBee, Wifi, an Internet-based service, relays … and the Steinhart-Hart equation. I hope you enjoy it.

What's next in the universe of IoT? Standards are being developed for ultra-low-power wireless networks. This will help millions of devices with ultra-low power consumption and decades of battery lifetime to participate and interact in distributed systems. This infrastructure together with low-cost chips will create even more interesting IoT possibilities – perhaps street lighting that only comes on when there’s a smart-phone near.

Finally, I deliberately used the term Planet Internet throughout this article, but I believe we are evolving to an interplanetary Internet! We are already connected to Astronauts on the International Space Station through a NASA server which relays Twitter traffic to and fro. We also have similar communication to our equipment on Mars. The more we send objects into orbit and to other planets and moons the more the IoT will distribute across our Solar System.

[1] In IPv4 (I haven’t rolled out IPv6 yet; that’ll be the subject of another programme, and blog post), a class C subnet has 254 usable addresses and typically one (or more) are allocated to each device.