Why the 11 proposals of the CEO's of Vivendi, Deutsche Telekom and Alcatel Lucent on "Internet à la carte" shall be supported

Internet Neutrality is a principle which advocates no restriction by Internet Service Providers on consumers' access to networks that participate in the Internet. Neutrality proponents claim that telecom companies seek to impose a tiered service model in order to control the pipeline and thereby remove competition, create artificial scarcity and oblige subscribers to buy their otherwise uncompetitive services. Many believe net neutrality to be primarily important as a preservation of current freedoms.

The meeting which took place last week to recommend to terminate "neutrality of Internet" and to install "Internet à la Carte" was supported by 11 proposals delivered by the CEO's of 3 major European companies : Vivendi for the Content Provider, Deutsche Telekom for the Telecom Operator and Alcatel Lucent for the Equipment Vendor. For Neelie Kroes the EU commissioner for the Digital Agenda, the meeting did not reach a consensus on the 11 proposals but she agrees to take into consideration the opinions expressed.  The EU Digital Agenda is committing for all Europeans to the basic high speed connection in 2013 and 30 MBit/s connection in 2020 with half of subscribers a FTTH/FTTB 100 MBit/s.  The 11 proposals suggested by the 3 key leaders have been criticized by new entrants complaining that it may create a de facto oligopoly at the benefit of incumbents. The 11 proposals are based upon sound principles as "2020 digital agenda objectives will be achieved through sustainable business models and more efficient use of scarce resources". It presents Telecom Industry as having  four layers : (1)access,(2)transport, (3)service creation and aggregation and (4) applications and content. The two main controversial proposals are

proposal # 5 : Europe should promote traffic management differentiation to foster innovation and new services and meet demand for different levels of quality and

proposal # 10_: there is an immediate need for Europe to promote open and interoperable standards for IP-based Quality of Service Interconnexion.

I believe that these 2 proposals need to be supported but for reasons which are different that the one announced. Layer 4 as described earlier is mixing wrongly content and applications. Content, be it music , video or web access, is sensitive to traffic saturation and low level of quality but the initial spirit of the Internet "best effort" has been coping with it since day one. When it comes to application traffic, saturation and quality of service are "of the essence" What about an E-Call -signaling that you had just had a severe car accident and helping ambulance and doctors to find your location to assist you - which is delayed because someone near the accident location  is watching TV on his mobile.  On August 17, 2010 Wired Journal wrote " The web is dead, long live the internet" to anticipate that very soon, Internet will be primarily used for Applications and less and less for web searches.  Applications developed to improve user experience using context aware computing will soon be the main driver for the Internet development. These applications will sit in the cloud and use the net to connect a mobile user to its application. Level of service will be key. The Business players ( Car Manufacturers for the E-Call) will be ready to pay for performance, security and reliability.

This is why I shall support the 11 proposals to achieve the digital agenda - not for the content delivery- but for the application execution which are  key for 2020 European competitiveness. 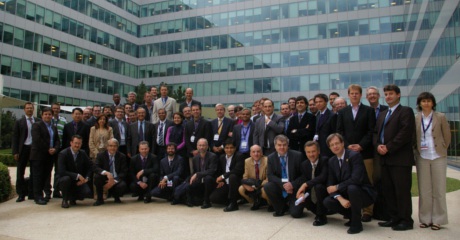 Can VMware Tanzu succeed? (Part 2)
Industry 4.0: The future of the industry is today!
Successfully manage organizational change: mission possible!
Evolving as a modern e-state: A new age of government