Posted on: December 9, 2014 by Dominique Hallouard

On the 12th November 2014 the Rosetta Space Mission made history when Philae, its landing craft, made the first ever successful comet touchdown. Over 510 million kilometres from Earth, the European Space Agency’s decade long journey entered its final phase as Philae landed on the surface of the Churyumov-Gerasimenko comet. 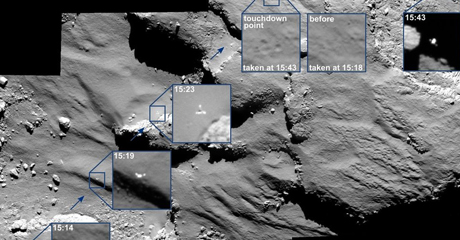 Although the mission was ultimately a triumph, things didn’t go entirely as planned. A bumpy landing in the ultra-low gravity atmosphere saw Philae ‘bounce’ 1km back into space before eventually settling back on the comet but hundreds of meters away from Agilkia, its intended landing site. However, celebrations were cut short when scientists realised that Philae was beneath a cliff, with the comet’s terrain blocking sunlight from the machine’s solar panels.

The team back on Earth immediately enacted its shortest-possible laboratory sequence to collect as much data as possible before Philae dropped into standby mode. So far, early reports suggest the lander has encountered organic molecules on the surface of the comet – a scientific discovery with potentially world-shaking consequences.

With Philae now powered down and scientists continuing to analyse its findings, we caught up with Laurent Peret and Dominique Hallouard, two of the Atos Planning Engineers for Scientific Operations on the Rosetta Mission team about their time on the project:

Q: How does it feel now the Rosetta Space Mission is finished?

LP: I think relief sums it up very well. The whole mission was a risky and difficult venture – the fact that we have completed nearly 80 per cent of our objectives is a huge accomplishment. The hard work of all the teams has been a huge factor in the success of this project.

DH: We have a few celebrations planned, that’s for sure! I feel incredibly proud; we have made history. This is an achievement that will have a huge, long-lasting impact on space exploration.

Q: What challenges did you face in the final phase of the mission?

LP: As the world saw, it was a somewhat rocky landing! When the lander bounced following its initial touchdown we were very worried; Philae came very close to flying away from the comet.

Most worryingly, the touchdown damaged some of the mechanics of the lander; as we didn't know how we landed all mechanical activities were postponed so we had to enact an alternative plan without mechanics activities to give us time to analyse the lander position to the ground.

More positively, the batteries worked incredibly well – they provided the maximum expected in fact! The power lasted much longer than we thought it could and by the end we were exhausted. However, knowing how valuable the data you’re collecting is certainly helped spur us on.

Q: What have you learnt from the mission?

LP: This was such a unique project that it will be hard to replicate. The key lesson to takeaway is certainly preparation: although the landing didn’t go as smoothly as we’d hoped, we had spent time working on experiment sequences for numerous different scenarios – we were able to change the plan at the last minute and ensure that Philae could still send back data from the comet.

DH: The project had lots of different agencies all being involved in some aspect - managing a mission with so many moving parts certainly presents its own challenges and there are many lessons to be learned from the scale of cooperation required.

Q: Could Philae ever reactivate?

Although Philae isn’t in the ideal position it’s still good news for the mission as the summer is coming to the part of the comet where the lander is clinging on to. With the comet coming continually closer to the sun there is a better chance of the solar panels being able to take in more energy.

If it does wake up we then we have a long-term science plan ready to put into action – and I imagine we’ll plan in some time for another big party!

You can read up on the full story of the Rosetta Mission here and well as enjoy our previous interviews with Laurent Peret and Dominque Hallouard.