Living beings will need IT to satisfy their basic biological needs in 2020.

What does a living being need to live, whether plant, animal or human?

As a Frenchman, I immediately think of feeding, with water, carbon dioxide and minerals for plants, oxygen and nutrients for animals and humans … A living being also needs protection, against low or high temperatures, against wind, rain, diseases, predators … Finally it needs to reproduce to ensure the continuation of its species.

Therefore we consider feeding, protecting and reproducing to be the basic biological needs of all living beings.

Have you noticed that these basic needs are becoming more and more IT enabled? The hereunder table is a draft compilation of the numerous domains where information technologies are revolutionizing the life journey on earth. 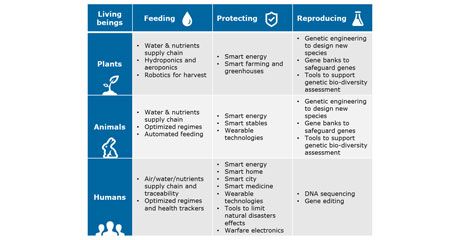 The feeding, the protecting and the reproducing of living beings evolve at a speed never reached in the past.

Towards a fully integrated feeding chain

Feeding has undergone a revolution since humans first wandered the plains of Africa. Man has advanced from being a simple ‘hunter gatherer’, using the evolution of technology to increase food quality and availability. Humans have designed a complete feeding model dedicated to satisfying their own needs, one that is no longer integrated in the natural ecosystem.

The present explosion in software and physical devices brings huge potential. How to align these emerging technologies to the existing feeding model in order to ensure food and water availability whilst maximizing economic efficiencies, allowing the traceability of nutrients and preserving the natural eco-systems and genetic diversity?

The C.R.O.P.S robotic platform, the Smart Water Management, optimized animal feeding regimes are just examples of IT enabled disruptions in this domain.

Towards a computer aided protection

While protection is of major concern for living beings in a natural eco system, it has become mostly under control in today’s man made and IT enabled environment, although this artificial protection comes with significant fragilities.

The first element of fragility is our dependence on electricity. Electricity and IT have become key enablers of life. As electricity is a compulsory enabler of IT and IT is an enabler of electricity, the failure of the electricity/IT loop could cause a significant threat to life. Mitigating this risk with the development of smart grids and multiple sustainable energies is critical.

A third element of fragility is pollution which can hinder plant growth or may have effects on fertility, fetal growth and some birth defects. As an example, IT is used in city tolling systems for low emission zones.

The protection against predators has totally disappeared as a concern for humans but a fourth element of fragility is the new threat of terrorism and electronic war, now fought with IT spywares and electronic warfare.

Moving away from natural reproduction

For plants, the main genetic “markers” (disease resistance, drought tolerance, yield, taste, nutrient richness, etc.) have been identified in their DNA thanks to super computers. The markers are then used to perform screenings and accurately select and breed the seeds that will produce plants with the most highly desirable traits.

Most of the animals participating in the human feeding chain no longer reproduce the natural way, and current research programs enabled by computers will soon deliver new breakthroughs. As an example, cows genetically engineered with human genes are able to produce milk similar to human breast milk.

For Humans, research advances are transferring to real life as the cost of sequencing an entire human genome is plummeting, divided by millions in the recent years thanks to advancements in HPC. Sequencing baby DNA at the very beginning of pregnancy and deciding to induce abortion in the case of genetic abnormality is considered by many to be a positive thing, but aren't we already on the eugenic slope? The Transhumanism movement puts forward that human beings may be able to transform themselves into beings with such greatly expanded abilities as to merit the label “posthuman” thanks to the convergence of nanotechnology, biotechnology, information technology and cognitive science (NBIC).

Living beings will need IT to satisfy their basic biological needs in 2020, a consequence of the third digital revolution depicted in the Ascent Journey 2018.