Surviving the world of Internet of Everything (IoE)

It is already out there. The recent Hype Cycle proves it once again, so "yes" – it’s not new. Rather we all know that the internet of things (IoT) or as others put it as Internet of Everything (IoE) - is a well-known, extremely powerful, unstoppable and definitely a world-changing force. Industry leading analysts predict that 25 Billion "things" will be connected to the internet by 2020*. Therefore, launching an IoE business is quickly becoming an imperative across industries and around the world. But the biggest question that revolves here is – “are we ready to step in to this”

How do we judge readiness?

Unfortunately, this task is not that simple. It is largely dependent to the depth we wish to judge ourselves. Looking at it holistically – IoE comes with 2 basic building blocks i.e. Front Office and a Back Office structure. Front Office is the one – which deals with the standard user facing digital assets. Whereas, the back office is stuffed with complex infrastructure - quite disturbingly though, mainly consisting of legacy applications, many siloed instances and plenty of human intervention in between.

Now, if we judge ourselves solely from a front office perspective, we see lot of traction there – specifically with organization which are dealing directly with customers i.e. B2C segment. Though this spread is not uniform across market segments, we do get to see a lot of maturity in this field. Have you witnessed the Coke campaign of “share a coke”? That is a simple mode of driving social engagement – leading to growth in business and revenue. So for a company like Coca Cola – they could definitely claim to have an edge while we debate on readiness.

But are we equally equipped while we deal with the Back Office? The answer resides in the readiness of our scalable IT Infrastructure and its ability to support the voluminous growth that our front office is generating.

Consider the case of General Motors’ - Chevrolet Corvette (C7) Performance Data Recorder (PDR). This PDR includes a windshield camera, performance monitoring and measuring tools and a host of other electronics that could do way more than just improving the driver's experience. Although this technology allows the driver to improve their driving skills at the local track, it also provides significant data toward understanding the owner's driving habits, understanding the stresses on the vehicle, and providing evidence about who is at fault in the event of an accident. But when it comes to transmitting the captured data, storing it and eventually sharing an actionable format with respective vendors – this calls for an upgraded, scalable, robust infrastructure – this is where we still have a distance to cover- specifically with open standards still evolving and ever increasing concerns on data privacy and security.

This leads to the concept of 2-Speed IT where two parallel universes are running at varying speed. But if we are at “2-Speed”, lets see how we wish to align ourselves.

How do we align ourselves?

If we have two different components moving at varying speed, it’s asking for a snap for sure. If the rapid progression of Digital Assets (and connected devices) at the front is not sufficiently backed up by the supported infrastructure, we are heading for a chaotic/disruptive customer experience. So, what do we do? Well, we can plug-in an adjusting lever (assume a step down gear) in between to bring in the regularity.

But what is this “Adjusting Lever”? 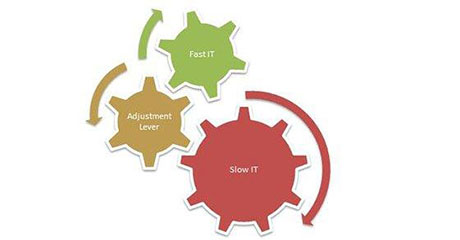 This is not a simple interface or a set of tools, rather this is a composition of ESPs (External Service Providers), practices like Agile, DevOps and Lean IT, mindset shift, integration of enterprises blocks with social media - all heading towards Web-scale IT formation.

IoE promises a very challenging, but extremely exciting future! Coming days will unveil more and bring up newer horizons of technological enablers in our daily life.

In my next post I will be diving a little deeper into Web Scale IT formation along with the threats it may bring.

About Arijit Sarbagna
View all posts by Arijit Sarbagna
Head - Agile & DevOps and Mobile Development
Arijit helps organizations build and lead engaged, solid, high-performance Agile development mindset, teams and infrastructure. He guides teams and their leaders in creating effective, humane and responsible work environments so they truly delight their customers and make a positive impact. He brings an “all-round” flavour by working at all organizational levels and coaching people in both technical and leadership behaviours. He has conducted numerous Agile readiness and maturity assessments, trainings, project kick-offs, large-scale deliveries, on-going process coaching, retrospectives and plenty of process fix-ups and tune-ups. Apart from his core capabilities around Agile, he has also been a keen developer in the fields of Java, PHP, C# and is also fascinated by the world of Mobile Application development (and likes playing with Android in particular).