Improve the quality of your software in 6 steps

No matter what happened in the past, you are now responsible for not introducing any new quality issues with the source code that you write.

As a developer, install SonarLint in your favorite IDE (e.g. Eclipse), and you will be amazed to find out that it will be identifying quality issues in your code while you are typing, giving you detailed instructions on what exactly you have done wrong, as well as what would be the proper way of fixing it.

Personally, I have been using SonarLint for the past year, and I discovered that it has helped me become a better software developer, by pointing out errors in my code that I was not aware of.

As a development team, it is suggested that you enforce a quality policy, by establishing an automated way of checking every commit for quality issues in your source code, preventing any issues from being merged to the main line. In particular, you may configure Quality Gates in SonarQube, setting one or more thresholds for different types of quality issues. For example, you may require that submitted source code should not introduce any new critical or major issues.

Where Do You Spend Most of Your Time?

As a developer, chances are that you spend most of your time reading code, trying to understand what it does. How many times have you read the same code, while trying to fix a bug or implement a new feature? Sure, you thought that this code needs to be refactored to be made more readable, but where do you start refactoring when you have a software application that is made up of thousands of files (e.g. Java classes)?

Even if your application consists of thousands of files, it usually happens that most of your software development activity is focused on a limited set of files. For example, in an enterprise application that I have been maintaining, I discovered that out of 10.000 files of source code, most of our development activity was concentrated on 10+ files, which would be changed in almost every commit.

It's time to check your own codebase for the most frequently changing files, therefore implicitly identifying where you spend most of your time as a developer. If you have git as your version control system, then you may execute the following command:

This command will print a list of sorted files from your codebase, with the most frequently changing ones (i.e. having the highest number of commits) being displayed first, as shown below:

As a development team, you can now rely on actual data (coming from your version control system) to take a well-informed decision on which files need to be refactored.

Refactor the most frequently changing files in your codebase, by making them easier to be read, and understood by every developer. This is a refactoring effort wisely invested, which will enable every developer to spend less time reading code, therefore effectively helping your development team to become more productive.

Do not waste your time testing mature code, meaning code that has not changed for a long time. Instead, focus your quality assurance efforts on testing frequently changing code which is more likely to fail! The latter code is changing all the time either because:

When you open a source file that has not changed for a long time, resist the temptation to refactor it, no matter how "ugly" the code might be! Old source code has already withstood the test of time, having been running in production without any problems. Why should you invest any development effort in changing mature code that is proven to work successfully?

I have personally found out that fixing old code may introduce defects that I have not thought of. Therefore, if your old code ain't broken, don't fix it! The only exception to the rule is the case of "dead code"; that is code that was committed sometime in the past (during the development of a feature), but was never used. If you are certain that a piece of code is not called, then go ahead and delete it! Deleting "dead code" will make it easier for every developer to navigate through the codebase, and will also reduce the total build time of your software application, thus saving valuable time from your development team.

Who Is Touching Your Code?

How many developers are touching the code of a given component in your software application?

If you have many developers that have occasionally contributed source code, with only a few commits by each one of them, then it is likely that this component will suffer from quality issues. According to research conducted by Microsoft:

“The number of minor contributors has a strong positive relationship with both pre- and post-release failures ...”

where a minor contributor is a developer with less than 5% commits in a component.

On the other hand, if you have a single developer who has performed most of the commits in the component (also referred to as the owner of the component), then it is expected that the quality will be better. As stated by Microsoft in the same research:

“Higher levels of ownership for the top contributor to a component results in fewer failures when controlling for the same metrics, but the effect is smaller than the number of minor contributors.” 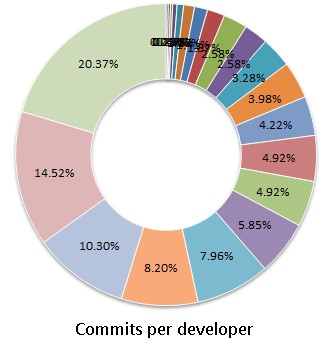 As a major contributor of a component, you should be paying more attention when reviewing code submitted by minor contributors.

As a minor contributor of a component, you should always be consulting a major contributor (ideally its owner) before making any changes to it.

If you are interested in further improving the quality of your software, the following resources may seem useful:

About Ioannis Kolaxis
View all posts by Ioannis Kolaxis
Software Architect, Atos Distinguished Expert
Ioannis Kolaxis is a Software Architect, building Next Generation 911/112 software solutions that empower emergency services to save lives. He has been previously developing software for the banking industry in IBM and the telecommunications sector in SIEMENS. He enjoys sharing his experience with the software development community, speaking at international conferences, such as Oracle Code One 2019. He was awarded by Atos the title of “Distinguished Expert” as a recognition of his technical expertise & professional accomplishments. He is an inventor, having filed several patents & having won the 1st prize award at Atos Innovation Week 2020 for coming up with the most innovative idea. He is passionate about new technologies and likes to share his thoughts on his blog & YouTube channel about how technology can transform our lives. Follow him on Twitter to be updated about his work.