Being Human in a Digital world – Part 1

Head of Atos Codex Offers for IoT, analytics and AI, Distinguished Expert and member of the Scientific Community

The world around us is experiencing changes it has never seen before. Technologies such as Artificial Intelligence (AI) and Big Data Analytics have extended our familiar physical existence, combining it with their new virtual dimension. As a result, we must fundamentally reposition the role of humanity – the qualities that make human beings humane – in the world.

As AI advances, we need to include human values and ethical behaviour in the AI models we develop. We need to ensure we develop an AI that is driven to sustain the future of humankind and our planet.

Let us share our thoughts on how we ensure AI meets these goals. In this first of two posts, we introduce a new model for investigating humans and humanity and for exploiting human imagination in the digital world.

Knowledge as an economic resource

Let’s first consider knowledge as an economic resource – a resource we can use to produce products and services that we can sell.

Knowledge is a very valuable economic resource and, quite uniquely, it reacts unlike any other resource when you consume it. As Harari considers here, knowledge grows the more you use it:

For years, we have thought of knowledge as a resource derived from humans. But as our world becomes more data-centric and data-driven, the development of knowledge extends beyond us. AI has advanced to a level where it can compete and, in specific cases, outperform our human capabilities when it comes to developing new knowledge.

In a nutshell, technology has evolved to an extent where it can create knowledge as well as – if not better than – us humans.

Let’s explore this further by first looking at a new model for investigating humans and humanity in a digital world. It is based on the model described in the Atos Connected Robots white paper and shown below: 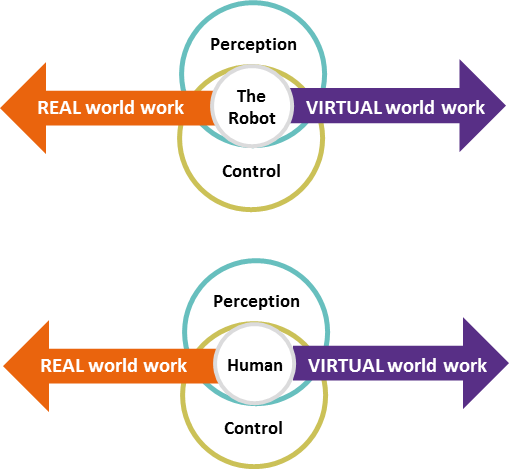 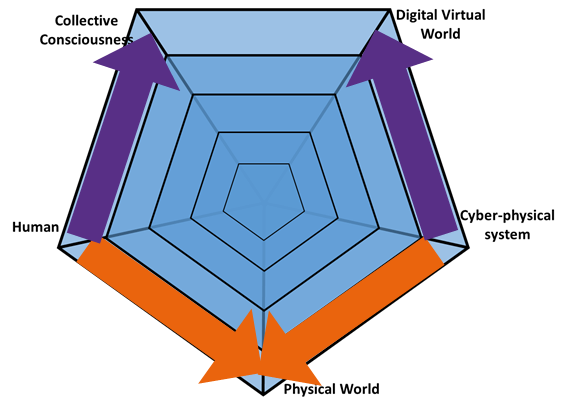 Figure 1: Combining the connected robot and human into the HCP-5W model

We first extend a simple model of a connected robot (see Figure 1) to humans. Both the robot and the human are able to perceive and control elements of their physical and virtual worlds.

We can then combine both models into a five-dimensional world model where we represent the connected robot and human very simply through three capabilities:

We can then place connected robots into a more generic group of systems called cyber-physical systems. Cyber-physical systems – or ‘smart’ systems – bring together physical and computational components. A typical example would be a smart car that monitors its surroundings and reacts in real time. It analyses the information it gathers from sensors then applies the brakes, accelerates or moves lane as needed, for instance.

So, how do human and cyber-physical systems compare? How do they carry out typical activities in their virtual worlds?

The left-hand image in Figure 2 represents the human individual with its imagination (shaded blue) and human cognition (shaded grey). The image on the right represents the cyber world with its Cyber-Physical System (CPS) and their sensing (shaded red) alongside key successful AI technologies such as Deep Learning (shaded green) and Knowledge Graphs (shaded yellow). The direct domains in which these capabilities operate are currently limited to the human side or to the cyber-physical side. But let us investigate Human imagination a bit further. 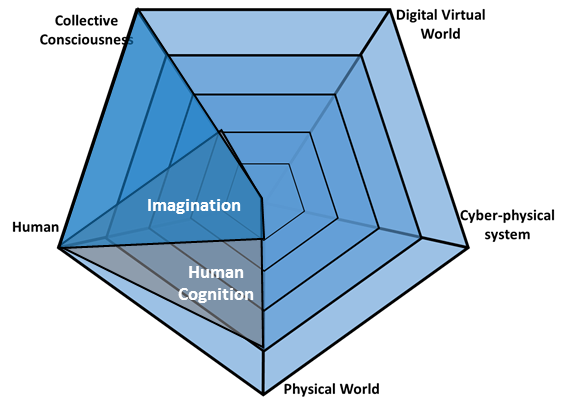 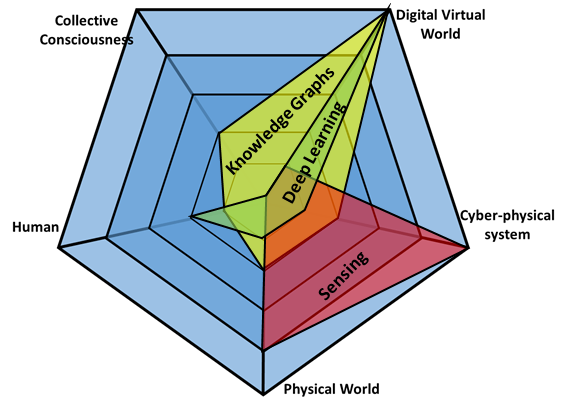 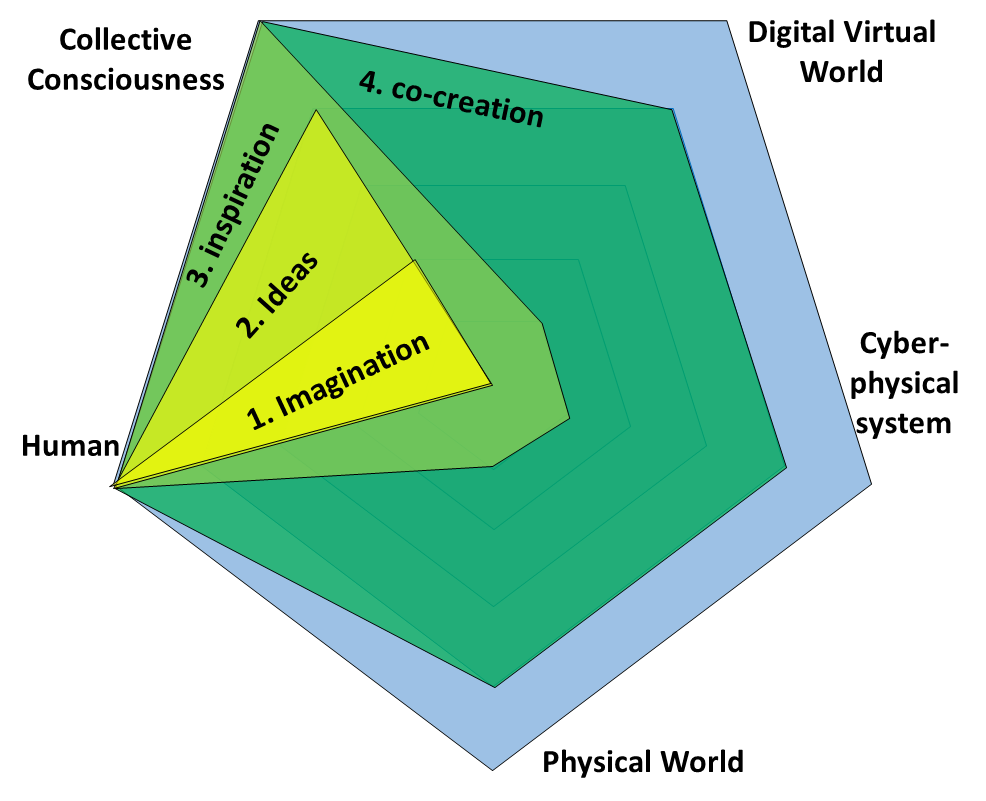 Figure 3: The relationship between human imagination, ideas and inspiration in human co-creation.

Human imagination in the digital world

Humans use imagination to create things in their minds before building them in the real world. They then use ideas and concepts to inspire other people to co-create these things and turn them into reality. To quote William Arthur Ward: “If you can imagine it, you can achieve it. If you can dream it, you can become it.”

The human imagination exists in the human virtual world. However, ideas created from the imagination can inspire large groups of other humans. Teams or larger groups of people (societies, nations, and beyond) can co-create a new reality, which is illustrated by the large green area in Figure 3. The domain of co-creation is almost limitless, especially when used in conjunction with elements of cyber physical systems such as AI and Big Data Analytics. It is only the limit of our imagination and perhaps (ultimately) the laws of physics that will pose boundaries.

VIEW ALL POSTS BY Dr. Erwin Dijkstra
Head of Atos Codex Offers for IoT, analytics and AI, Distinguished Expert and member of the Scientific Community
Erwin Dijkstra is responsible for Atos Codex Offers in IoT, analytics and Artificial Intelligence. Erwin has a PhD in Solid State Physics, has worked almost a decade for a leading Oil company in drilling, petroleum engineering and field development planning. Erwin is a member of the Atos Scientific Community that is the best 135 scientific people from within the group who are “creators of change”, making sure that whenever our clients choose Atos they always get the best solutions available in their journey to digital transformation. In Erwin’s view, as a business expert, he has a duty to keep learning with its customers, to keep actively engaging with disruptive innovative ideas, to have regular exchange with his peers and expert communities, and to be open to investigating new developments. He is fully committed to help Atos and Atos’ clients anticipate and craft their vision regarding upcoming technology disruptions and the new challenges facing our industry.

VIEW ALL POSTS BY Jim Smith
Assistive Technology Specialist, Senior Expert and member of the Scientific Community
Jim Smith is an integral part of the UK & I Accessibility and Digital Inclusion Team, working with both Atos customers and Atos employees. Jim has a PhD in Geology and worked in academic research on quantitatively modelling depositional environments for 15 years before joining Atos. In Jim’s opinion we have a responsibility to ensure that the technologies and business processes we develop are fully accessible and inclusive from their inception and these principles form an integral part throughout a product or service’s life-cycle. He passionately believes that Accessibility and Digital Inclusion are about ensuring that all employees can perform to the best of their abilities, through both the use of technology and the development of business processes, rather than simply ensuring regulatory compliance.

Spatial computing for smart cities
The storm is coming:  flood abatement sensors to the rescue
Cloud is moving to the edge for smart cities
Artificial Intelligence: the new power in Financial Services