How to grow an Enterprise Social Network? - Part 2

In the previous post the difference between an Enterprise Social Network (ESN) and a typical business application was explained and how to start growing an ESN. 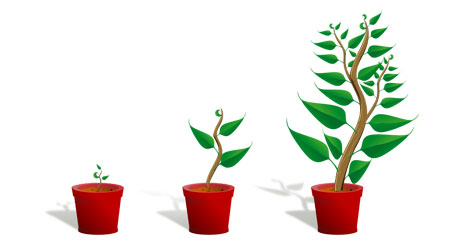 The first 3 reasons were addressed in the first post , so let us dive some deeper in the last one. According to the technology adoption life cycle of Rogers you can roughly distinguish 5 segments of people related to the adoption of technology (Innovators, Early Adopters, Early Majority, Late Majority and Laggards). Let’s bring these segments in relation to growing an ESN and the willingness to change. The first segment is formed by the Innovators, which is roughly 2.5% of the organization population. They pursue new technology products aggressively and sometimes seek them out even before a formal program has been launched. This is because technology plays a key role in their working life.

Second are the Early Adopters, 13.5% of the population. They buy into ESN concepts very early in the program, but unlike Innovators, they are not real technologists. They are more people who find it easy to imagine, understand, and appreciate the benefits of this new technology and to relate these potential benefits to their work environment. The Innovators and Early Adopters are the ones you want to have on ESN as soon as possible, but there is one problem, you don’t know where they are in the organization. For those employees the equation for embracing change, in this case delivered by the ESN is experienced as positive. Let’s take a closer look at this equation related to willingness to adopt change which was formulated by Dannemiller: Dissatisfaction with how things are now x Vision of what is possible x First, concrete steps that can be taken towards the vision > Resistance

Let’s start with Dissatisfaction with how things are now. At the beginning of the Zero email program we conducted a short survey related to email overload, because this was the trigger to release the bullet to change the current way of working towards smarter ways of communication and collaboration. The survey was based on the work done by Hogan and Fisher and the results showed a clear dissatisfaction with the current way of working with email. 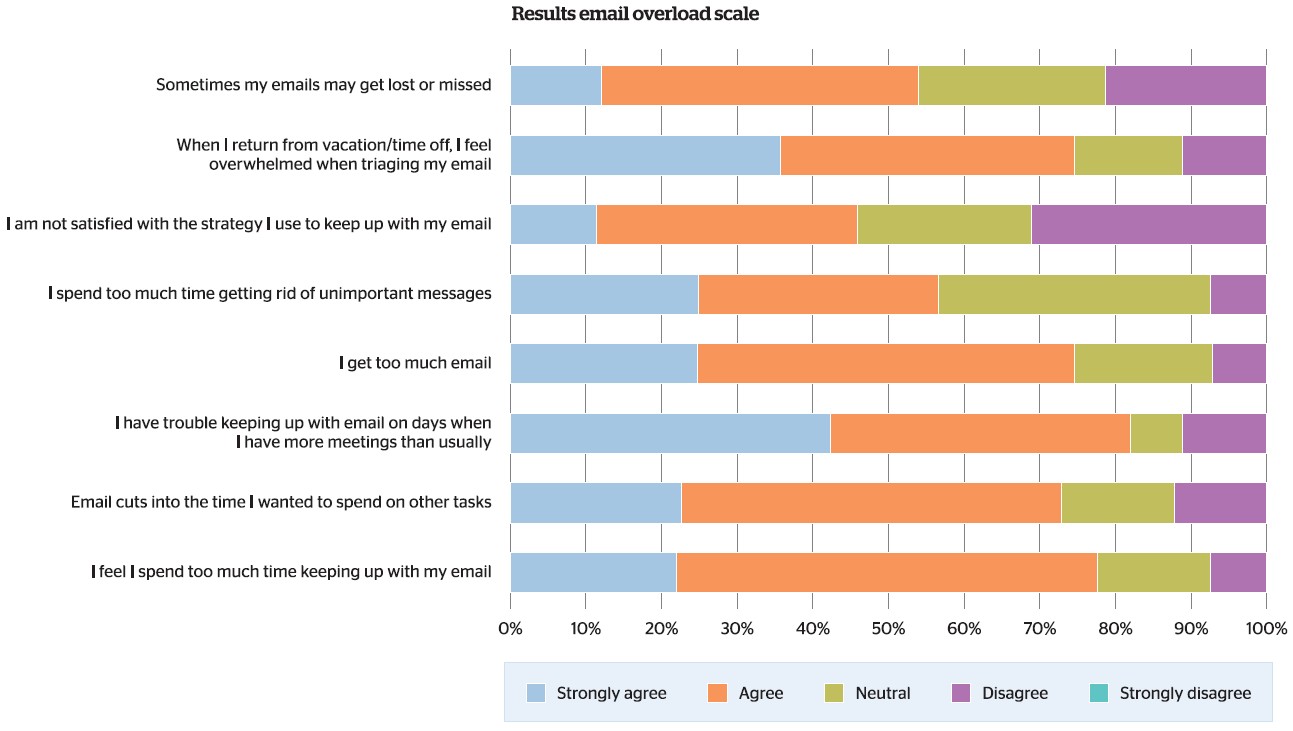 The first two groups, Innovators and Early Adopters will grasp the Zero email Vision of what is possible and are more likely to set the First concrete steps in the new future of work.

The next segment in technology adoption life cycle, the Early Majority, which is 34% of the employee population, share some of the early adopter’s ability to relate to technology, but ultimately they are driven by a strong sense of practicality. So in terms of the change formula D is constant, V is slightly lower than with the Innovators and Early Adopters and the crux for this group is F, first concrete steps, to overcome the natural Resistance to change. The Early Majority wants to see well-established references before investing substantially. Because there are so many employees in this segment, winning their support is key to reach substantial adoption of new ways of working and thereby creating the foreseen network effect with associated business outcomes. To get the Early Majority on board clear collaboration patterns, use cases and success stories with proven business value have to be brought to the table.

The fourth segment, Late Majority (34% of the population) share the practicality concerns of the Early Majority, but have an extra handicap in adapting to change, because they are not as comfortable with their ability to handle technology as people in the Early Majority segment. They will wait until collaboration patterns, use cases, success stories have become established best practices in the organization. In terms of the formula D is constant and V and F are lower than with the Early Adopters. So to overcome their Resistance to change all lessons learned with smarter ways of working without email leading to greater business value have to be translated into enterprise wide best practices accompanied with well documented processes and training.

The last segment which is formed by 16% of the employee base are the Laggards. They simply don’t want anything to do with change, probably for a variety of reasons, but no matter how much energy you put in this segment they will resist. So no use in pursuing this segment, you will face them when there is no escaping anymore, because the whole organization has adapted to the new ways of working, then they can make their mind up: to change or… 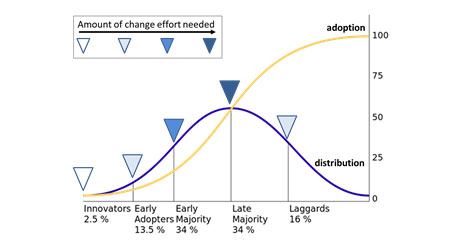 First you have to prepare the soil for the ESN by getting the Innovators on board. Secondly, when ready, plant the seeds together with Early Adopters and thirdly water them to make them grow with the Early Majority and close the cycle with the business value harvest thanks to the Late Majority. The above presented insight is probably not common knowledge and could also be one of the reasons why Gartner at the end of 2012 predicted in their research: “Through 2015, 80% of social business efforts will not achieve the intended benefits due to inadequate leadership and an overemphasis on technology.” The explained strategy phases for growing an ESN are easy to understand, but difficult to put into practice because in reality you can’t make the segmentation of the employee base according to the technology adoption life cycle of Rogers. Of course there are exceptions, but in general you could say that within every process or department the distribution over the different segments is likely to reflect Rogers’ theory.

This impacts the overall strategy significantly, because an ESN is an infrastructure for human interaction and thereby it is not possible to push the adoption to well defined target groups of employees, like with typical business application as for example ERP. So a different approach is needed, you have to pull employees into the ESN by offering access to every employee within the company just after the preparing the soil phase as described in the first post.

The expected effect will be that Innovators and Early Adopters will jump on as soon as they know of the existence of the ESN. So how to reach out to this important segments which form 16% of the employee base, in the case of Atos we are talking about roughly 12.000 employees? The answer is communication, but first you have to be ready to welcome the new users to the ESN. Training sessions have to be prepared (class room, webinars and/or e-learning) and need to be accessible through a training community. Support is to be taken care of, so a Social Helpdesk needs to be in place. This is a community where users can ask question about ESN application and answers are provided by other users and/or community moderation team. The formal helpdesk has to be in place as well to report any issues a user is experiencing and so on. The communication campaign itself has to be orchestrated as well and addressing two different approaches:

One thing has to be taken into account with the top-down communication; it is a scattergun approach to get Innovators and Early Adopters on board. So don’t expect a magical broad and lasting adoption, even if the communication campaign is brilliantly orchestrated. The reason is simple because the Early and Late Majority segments are not ready to change their way of working.

Of course there will be an enormous spike of new members, they are curious and want to take a look at this new thing, even follow training, but they don’t adopt the new technology yet. In the case of Atos less than 10% of the employees who followed the initial training adopt the ESN in their way of working. So in this case training doesn’t lead to behavior change. This can be clarified as follows: just after the ESN introduction, training can only explain how the different features of the ESN are working; it is a ‘click here, click there’ experience and can only stipulates some generic communication and collaboration patterns. The why and how the ESN should deliver real business benefit can’t be addressed yet, because an ESN is an infrastructure for human interaction and depends on the creativity of the ones using it in their day to day business.

Business value is next

The business value question will be answered by the Innovators and Early Adopters within the company, because they have Dissatisfaction with how things are now, get a Vision of what is possible with the ESN and will take the First, concrete steps to realize their vision. Does this mean you have to wait until Innovators and Early Adopters will come forward with the proof that an ESN provides real business benefit? The answer is ‘no’ and the exploration of this answer will be the topic of the next post how to provide assistance to let business value flourish by making use of an ESN. One thing is crystal clear: you can’t push for change and adoption or in terms of gardening you can’t pull the grass to make it grow faster, but you can carefully guide the process of growth by watering and nurturing.

About Jan Krans
View all posts by Jan Krans
Director Enterprise Collaboration, Social Collaboration & Knowledge Sharing and member of the Scientific Community
Jan Krans is Group Director Enterprise Collaboration, Social Collaboration & Knowledge Sharing, a member of the Scientific Community and a Lecturer at The Hague University. Jan is specialized in new ways of working in combination with social business and he likes to surf. Not only the web, but also waves and wind, to get a clear mind and to be connected to nature’s forces. Do you want to be in contact? Just send a tweet to @Vivjan or drop a line at jan.krans@atos.net