I never imagined that you would be able to earn $1m just PLAYING games, but Zhihhao Chen has.

I never imagined that you would be able to earn £1m a day just from transactional games revenue, but King has for Candy Crush.

I never imagined that 32 million people would watch a live computer game tournament, but they have for League of Legends.

I never thought that gaming could have a big impact on enterprise business, but I believe it can.

But then I’m biased.

I admit it. It’s my guilty pleasure. Computer Games.

It’s just changed unrecognisably since I started in the late 1970’s with Pong on the Atari, moving in 1980 to Space Invaders arcade machines and text based adventures on the Tandy TRS-80 and a stream of others as games developed throughout that decade.

Many years later, I remember the arrival of the first person shooter with Doom & Quake, then being amazed with the arrival of Half-Life (1998, amazing graphics) and more amazed by Far Cry (2004, more amazing graphics). I became immersed in Everquest (for some reason rather than World of Warcraft) as Massive Multiplayer Online Role Playing Gaming (MMORPG) arrived, and then later on God of War, Skyrim, Guild Wars, Uncharted and many more. 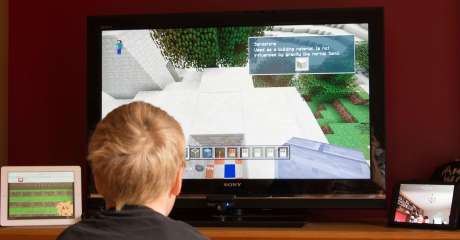 I get bored easily though. I immerse myself, and then move on. I figure out what each brings differently, where it has evolved – graphics, collaboration, storyline, challenge – and where they may go next. I look at them with childhood fascination, and yet with an eye on relevance in my world of technology in business. I’d be a rubbish professional gamer, because I never play a single game for long enough!

In 2007, we looked at the use of virtual worlds (such as Second Life) or 3d virtual stadiums in bringing a virtual new media experience to sporting events, and even to bring our portfolio to life through walk through theatres and libraries. I’m reminded of this today when I’ve tried Oculus Rift recently, immersing myself completely in a 360 view of the landscape. Whilst I might look forward to playing my current favourites Destiny and Shadow of Mordor wearing this, I’m actually more interested in how it could be applied to solving Business Technologist problems – for example, exploring Connected Buildings from CAD drawings.

Take The Last of Us, another genre defining release from last year. The Last of Us, at heart a zombie shooter, had a fantastic story line, more than the usual cut-scenes, and real characterisation and voice. In short, it was a film where you were able to take control of the lead characters at key points in the film. Playing it created your own personal narrative for that story experience. Your version was 90% similar to others, but it was executed the way you wanted. Watched the way you wanted.

But what you then find is that gamers are recording their experience, their version of the story, and posting that online for others to experience. In short they are creating multiple versions of that film. I know that many of you reading this will react with horror, confused as to why people should want to watch such – and yet, people do. Look at Twitch. Twitch is a platform where gamers share their videos of them playing games. Amazon has just beaten off Google to acquire it for over $1bn.

I see why when I watch my son, who is 9. Whenever he plays Minecraft or FIFA (now 15), he has a series of video clips playing that give him guidance, ideas, plans for his next play in the game. It is very much his second screen, but he also has a third … the third is a tablet with a Facetime conversation with his friend who he is also playing the same game with online.

Minecraft is also fascinating in other ways. You may have read elsewhere that people have already created the entirety of Denmark in the game, block by block. But I am far more fascinated by the team that built a working CPU – in the game – block by block. It takes some ‘getting your head around’ – a PC that runs a game that contains a PC. I’ve noticed it with my son though. He is exploring, through using video content, and is now constructing basic switching circuits – not consciously maybe, but pushing the boundaries of his knowledge. He is learning. His spatial awareness and creativity already shine through. How will he apply that to his later career I wonder.

I’d like to finish with Candy Crush. Candy Crush has that addictive puzzle element to it that seems to appeal to many, but I’m more interested as to how they gave it away free, apart from that point when you are in desperate need of assistance. That’s the point that you can pay to move on a level. The point is that they have invested heavily in understanding, through analytics, your pain points. It’s predictive behaviour modelling, and that’s how they’ve been so successful in bringing in the millions.

Now apply that logic to those new narratives, those videos made by gamers all over the world. How might you monetise those? How might you rate them? How might you integrate them into the midst of Destiny such that you could immediate watch the most effective, the most stylish, the most convoluted way of solving whatever part of the game you are trying to master next. At the moment, watching such video is free… but how much would you pay for the next best fit to what you need at that particular point in time? After all, it’s a similar premise to that behind Ello, the much recently talked about social network that is planning a charging model based on the features you personally want.