2014 is seeing the further development of a new category of web-connected wearable computers and personal sensors. These are enabling the development of a range of services based on measurement of physiological indicators to take quantification and resulting management of health and wellbeing to a new level.

However devices that can measure changes in physiological indicators, such as heart rate, body temperature, pupil dilation or galvanic skin response (GSR - the conductance of the skin affected by sweat production) can be used to measure response to environmental stimuli. In the same way that a tweet can be correlated to a specific location and hence a text-based emotional reaction mapped to a physical event, so the same can in principle is done in the context of mapping the change in the amount of sweat induced moisture on the skin. 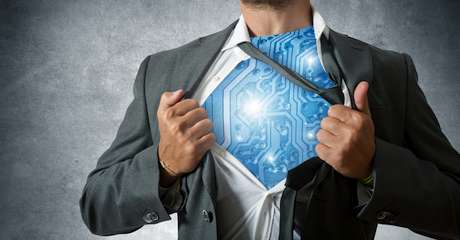 Consider the power such technology, and more importantly the resulting data might have in the context of the World Cup or other major sporting events such as the Olympics. Broadcasters are eagerly mining location-based social data to enable them to make smarter production decisions. Consider what it would mean for a live production team if they were able to measure the emotional response of a million fans in real time throughout the course of a game. And consider what that would mean for a sponsor. It takes audience measurement to a new level – ethnographic research in real time at a universal set level, not small expensive focus groups.

Of course biometrics is still imperfect proxies for actual emotion identification. Despite much research into GSR, it is challenging, for example, to distinguish a change in GSR as being due to fear or attraction. And there remains an open question of what services do you have to deliver consumers as a pay-off to make them willing to share such, literally, intimate data with a party looking to exploit such data. However multiple sensors (the iWatch is rumored to incorporate up to 10 sensors albeit of an undisclosed nature) increase potential to correctly match biometric proxy to actual emotional response, and we await the “emotional Twitter” to come.

Emotional response is not just powerful for live events of course. New sources of data on users’ physiological response create exciting new possibilities for adaptive content and even narratives that react to the emotional response of an individual, or even a social-network connected group of individuals.

Today dynamic narratives happen through 1-on-1 interactions with a computer game or web application, but all of these rely on variants of point and click or gesture interfaces. Arming users with sensors to measure a physiological response will enable a much richer stream of data - beyond just clicking stream data - that can inform a tailored narrative designed to elicit or respond to a specific response.

Imagine an application that is programmed specifically to elicit a series of emotional responses through the delivery of dynamic content. Content creators would be able to “script emotion”, enabling a common emotional response, but delivered through a unique personalized experience.

Finally, it would be remiss not to discuss the implications for media measurement. The ability to measure at massive scale physiological response to what is on TV, or any other media-capable pane of glass, revolutionizes the concept of media measurement.

Today real-time social feeds such as Twitter are redefining the concept of the real-time feedback loop for TV and moving measurement beyond the simple panel. However, such social platforms as Twitter are a) skewed samples b) discontinuous. The biometric data of even a small subset of the smartphone or wearable owning public would revolutionize the measurement of the effectiveness of brand advertising.

In the words of John Hegarty, founder of the ad agency BBH, the role of advertising is to secure the world’s most valuable real estate, a corner of someone’s mind. Until this point, we have measured this through Gross Rating Points and correlation to sales movement, as well as in very expensive small-scale ethnographic studies. Now we are facing an age where we may be able to measure emotional and even sub-conscious response and do that in massive scale, truly instant zeitgeist at a deeply emotional level.