Discovering the Secrets of Mars

The Martian, a film about a stranded astronaut on Mars, has captivated the world. It’s a gripping story of our human struggle to explore Mars. While it’s not realistic in all parts, it gives some insight into the formidable challenges of conducting scientific experiments in space.

It is almost four years exactly since NASA began its historic voyage to Mars with its Science Laboratory (MSL). It took with it ‘Curiosity Rover’ a small car-like robot designed to analyse the surface of the red planet. Landing on 4 August, 2012, Curiosity’s primary mission is to understand if Mars has ever been habitable.

The mission also wants to explore radiation and temperature factors to refine our current knowledge about the environment at the Mars surface. It could give us vital clues to consider whether we could ever develop a human colony on Mars. It’s a huge question but one that’s incredibly exciting to research. Here I give a first-hand account of my role on the mission and update on the recent discoveries Curiosity has made. 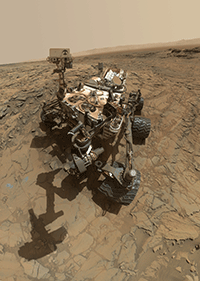 There are two French instruments on-board Curiosity one of which is called ‘ChemCam’ which uses its laser to rapidly analyze rocks and Martian soil. It can then determine their compositions and identify samples for further drilling and analysis. My role at Atos is to undertake the daily programming and monitoring of ChemCam, which takes place at FIMOC (French Instruments Mars Operations Centre), hosted by CNES (French National Centre for Space Studies). The ChemCam activity plan is jointly worked on with scientists from IRAP (Research Institute in Astrophysics and Planetology). Each day the Curiosity operations team plans an entire Martian day, or sol, of rover activities. As a ChemCam Payload Uplink Lead, I write the code sent to the rover to move its head in a certain direction to further analyze rocks by zapping them with the ChemCam laser.

Each day I’ll start work at around 4pm which is the start of the day for my NASA colleagues in California. While NASA has overall responsibility for Curiosity, we are responsible for ChemCam so I’m on hand during their working day to answer questions from MSL scientists. We collaborate together so we can advise the best way to analyze a certain portion of strata or soil. I’ll normally finish my shift around 1 or 2 am.

My Atos colleagues are systems and software engineers and ensure that CNES’ computers are working smoothly. There are often IT challenges when you’re dealing with space exploration so we have to problem solve and write new software to overcome these problems. We are also involved in integrating the software processing the instruments telemetry to ensure all the data generated is correct.

Postcards from the Red Planet

Every day we receive a new ‘Martian postcard’ from Curiosity. It’s one of my favourite parts of the day. The navigation cameras on-board Curiosity take a mosaic panorama of photos and send back the associated data. It gives a fascinating perspective on Mars and never ceases to amaze me.

Last month the team behind NASA’s Mars Science Laboratory confirmed that between 3.8 and 3.3 billion years ago, Mars was once capable of storing water in lakes over an extended period of time. Data and photos from Curiosity determined that water helped deposit sediment into ‘Gale Crater’ where the rover landed over three years ago.

The teams found that the lake was not too acidic and contained essential elements like carbon and oxygen - the conditions for life to appear. It was an incredible scientific finding and one I’m proud to be a small part of. Every time we make a discovery, we realise that Mars is much more complex than first thought. Curiosity is currently exploring a varied and interesting part of Mars so there could well be further exciting discoveries to unveil over the next year….

About Laurent Peret
View all posts by Laurent Peret
Consultant
Laurent Peret is a Business Technologist and Atos consultant with a background in interplanetary planning, currently working as spacecraft operation engineer for Curiosity, the latest of NASA’s Martian rovers. Peret has been involved in a number of other space programs, including a space debris avoidance approach for one of the International Space Station’s resupply vehicles.