After travelling over 560 million km, the Curiosity Rover has spent the last four years exploring the surface of Mars. Moving slowly across the barren terrain, NASA’s Mars Science Laboratory (MSL) has travelled over 10 km across the red planet; ascending the lower portions of Mount Sharp, a 3-mile high mountain in the Gale crater, and passing by Point Lake before arriving at its current position on the Lubango fracture zone. 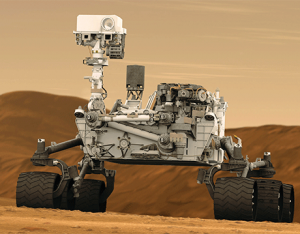 journey, however, has not always been a smooth one. On the 7th November 2014 – mission day 801 – after two years of standard operations the rover’s ChemCam autofocus functionality failed. Built into the head of the rover, the ChemCam uses a laser pulse to provide information on the elemental composition of the Martian landscape.

As a crucial part of the Curiosity mission, its failure was a serious cause for concern, meaning that all of the data shared by the instrument would have been sent back to earth unfocused of poor quality and completely useless.

As you might expect, the failure of any component, no matter its size, is no small fear. And when the earthbound team noted a significant decrease in power within the laser diode it was instantly obvious that something had gone wrong.

It may only be one aspect of the ChemCam’s operations, but the autofocus function was one of vital importance. Essentially, when you want to analyse an object with the laser pulse, you need to provide an accurate estimate of the distance between the camera and the object. The autofocus calculates this distance to a very precise level. Although vastly more powerful, it actually works in a similar way to the camera on your iPhone – adding sharpness to the image and ensuring that we have a precise view on what is being analysed.

Our first step was to form a small team of experts to assess the damage and understand the origins of the fault. Despite analysing both the component and its surrounding electronics, there was no smoking gun. The team came to the conclusion that either the material inside the diode had broken, or another component had malfunctioned and had taken the diode down with it.

It was also important to uncover if we could still use the autofocus without the original laser diode, and without causing further strain on the system and breaking more components. Thanks to a manual focus system, the team knew that we could continue.

Next, we set about finding a workaround. We started with a technique known as focus stacking – a common technique in digital image processing, which consists of taking multiple images at different focus distances. We then used software to automatically select the images that were in best focus.

This was not, however, an ideal solution. It was far less efficient for the rover and required more time, energy and data. It also added a lot more complexity as we had to add in a number of manual calculations to program the focus stacking sequences. It worked, though – and we ended up using this approach as a stop gap solution for just under six months.

At the same time, the team was also working on a more effective answer. By modifying the ChemCam instrument’s flight software to use the camera’s imaging system, we added an automated process that meant only the sharpest images were sent back to earth.

After a long process of testing – and ensuring that the algorithm was flexible enough to adapt to the changing Martian landscape – our team was able to restore the autofocus functionality. In fact, the new, software-defined approach actually allows the rover to autofocus over larger distances.

What is perhaps most amazing, is that this was one of the first ever interplanetary repair jobs. It was a near-unprecedented feat of engineering ingenuity and I’m immensely proud to have been part of the team. And now,with the Curiosity Rover completing its second Martian year, it’s exciting to think that our craft is still able to operate at full capacity.

Who knows what we will discover next?

About Laurent Peret
View all posts by Laurent Peret
Consultant
Laurent Peret is a Business Technologist and Atos consultant with a background in interplanetary planning, currently working as spacecraft operation engineer for Curiosity, the latest of NASA’s Martian rovers. Peret has been involved in a number of other space programs, including a space debris avoidance approach for one of the International Space Station’s resupply vehicles.