My IT Challenge Fantasy

The Awards Ceremony for the 3rd Atos IT Challenge took place in Paris on Tuesday 17th June. The competition invites student teams from universities around the world to develop applications to meet a specific theme. The topic this year was the creation of a mobile App for the Olympic and Paralympic Games in Rio which will be held in two years' time.

I was fortunate enough to be the Atos Scientific Community coach for the Chocobo team from Loughborough University in the UK. Chocobo is a character in the game Final Fantasy and the team chose this name as they had decided to create a fantasy athletics application. Out of over 40 submissions which made the first cut, then down to a final 10 teams which presented their application to a jury, Team Chocobo received a well earned 3rd place overall.

I was really impressed with the dedication and commitment of the team members; Jon, Matt and Favour, and each brought a particular strength to form the whole package. It was a pleasure to go with them and their supporting university lecturer to Paris for the ceremony itself, plus dinner and tour of the city. 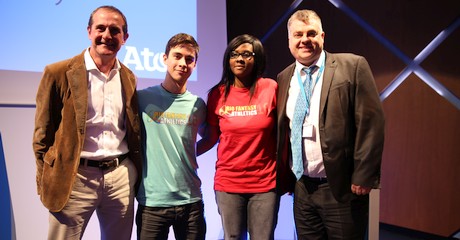 There was stiff competition in the final three with a crowd density analysis application from Colombia University, New York, USA ... and the overall winners from Bordeaux, France produced "My Olympic Planner" which ticked all the boxes of the judging panel.

The prize for the winning team is a visit to Barcelona to meet with IOC and Atos to agree how the application will be made ready for Rio - and with it the opportunity to create their own business if they wish (all of the teams retain the IPR for their ideas).

Over recent years I have been spending an increasing amount of time working with graduates that have joined our organisation and undergraduates in initiatives like this. It's rewarding to see fresh ideas and new approaches from them when tackling the business world. I advise the students themselves that participating in competitions of this type is a sure way to differentiate themselves in the job market. I know that all three of my team have opened up new options for themselves as a result of their engagement with us.

I know that Atos is also impressed by the talent of the students competing; their enthusiasm and creativity as well as the sheer quality of the entries received throughout this IT Challenge, which forms part of the Atos Wellbeing@work initiative and supports its objective to encourage and develop talent.