What can Mobile World Congress 2018 tell us about Creating a Better Future?

Last week, mobile manufacturers and operators from around over the world showcased their latest offerings at the annual Mobile World Congress (MWC). With 107,000 visitors from 205 countries descending on Barcelona, there were plenty of hot topics and trends hitting the headlines with the objective to Create a Better Future.

We saw Samsung unveil its latest handset – the S9, a dual-screen folding phone Axon M from Chinese manufacturer ZTE, and the launch of Sony’s Xperia XZ2, complete with a full HD+ quality 4K camera. From live 5G pilots to Augmented Reality (AR) and the Industrial Internet of Things (IoT), the show floor was as expansive, energetic and exciting as ever – I personally covered 30km on foot over the course of the event!

But what do the key trends that captured my attention tell us about what lies in store for the industry over the next 12 months? Here are my key takeaways:

While 5G was covered in theory in many slide decks and presentations at last year’s MWC, this year saw some truly promising examples of 5G connectivity in practice. One such demo on a stand invited visitors to throw a ball from one axis of a sports stadium to the other. Shown on two screens, two images of the ball were displayed – on one screen, connected with 4G, there was a short delay before seeing the ball, whereas the other, connected with 5G, displayed the ball almost instantaneously. 5G promises to be 100 times faster than 4G and 10 times faster than current broadband connectivity. The low latency and huge bandwidth facilitated by 5G will pave the way for new innovations that simply aren’t possible today – from connected cars and IoT to AR and edge computing. 5G will facilitate the appearance of new disruptive business models in the coming years.

At points during MWC 2018, it felt more like an automotive event than a pure mobile event. Seat, BMW, Audi and Mercedes were among many manufacturers displaying autonomous, connected, 5G cars this year. We unveiled a pilot with SEAT, which will enable drivers to use music recognition app, Shazam, while driving, through the SEAT DriveApp for Android Auto.

Importance was also placed on Artificial Intelligence (AI), with voice interaction taking centre stage. Major players such as Google Home and Alexa were out in force, which I believe acts as an important signal for the future. Soon, voice interaction will become a more standard interface both in consumer and workplace environments. There are plenty of scenarios where it will become invaluable in future; when individuals are using their hands for other tasks – driving, gaming or operating heavy machinery, for instance. There was also lots of discussion around AI being used to optimize network operations in telecommunications – with operators deploying the technology to improve the way networks are planned and managed. 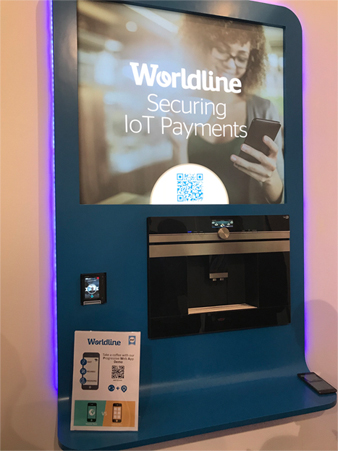 There was a big focus on industrial uses for the IoT rather than just the consumer side, with a lot of conversation around how we’ll be able to manage so much data running through our networks. On our own booth, we debuted a connected coffee machine, which enabled visitors to order their coffee from a chatbot and pay using their smartphone.

There were also several use cases of Blockchain on display. On our own booth, we showed a solution called Origin, launched by Bureau Veritas with the support of Worldline. The solution is designed to help people trace the origins of the food they’re consuming – with all the stakeholders involved in the supply chain providing traceability information in a blockchain. There is already a strong need in the market for this, given the recent food scares around baby formula milk and salmonella in France and listeria outbreaks in South Africa.

I was surprised to see so few smart watches and fitness trackers on the booths this year. While manufacturers like Fitbit dominated proceedings a few years ago, MWC 2018 was relatively quiet for new launches in this space. However, wearable devices in other domains seemed to be on the up. There were plenty of demos showcasing how smart glasses can be used in industrial environments, via Augmented Reality, mixing real-life scenarios with operational information or training advice displayed on the lens.

As with last year’s event, we saw more incremental technological change, than brand new, disruptive innovation that will transform our lives. That said, it was hugely positive to see the advancement of 5G since last year, and it will be interesting to watch how this plays out in the market over the next few years. As the dust settles in Barcelona for another year, it looks like we have a fascinating 12 months ahead of us, and I’m looking forward to helping our clients be better connected and improve their offerings to their customers with our services.