Around the globe in real time

Sochi Winter Games are the most connected, with more than 8 billion devices, and people following them are expecting to get all results immediately from any digital platform. In fact, while a top speed bobsleigh travels just 20 meters, technology enables that data from a remote mountainside in Russia is delivered to thousands of broadcasters, media, and websites all around the world.

This means that a person in Sydney, Barcelona, Singapore, New York or Johannesburg can get on his mobile app all results from today´s competition in Sochi mountains in less than half a second. And when you have in mind that five years ago it was very hard to find a Wifi connection in Sochi, this becomes a significant achievement. 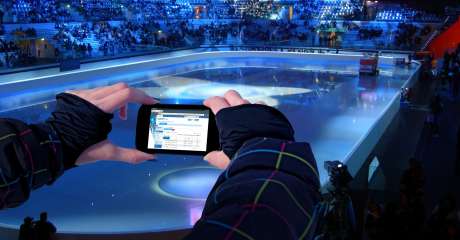 How is this possible?

This is possible thanks to the integration of different technologies. First, you need to automate recording all data from all competitions, with some of them running at the same time. Then, you also need secured high-speed networks and computer servers in order to store and distribute all this data from different venues to the world via wireless networks, fiber optic cable, and satellite. And on the top of that, you also need several duplicated systems in case something fails.

How have we seen data distribution to the world evolve in the Olympics?

We could start at Paris 1924 with the first live broadcast of Olympic Games. Later, Berlin 1936 were the first to be televised with a private broadcast in venues around the Stadium. We had to wait more than two decades till Rome 1960 to have the first Games fully televised. And we had to wait even more till Atlanta 1996 to have the first-ever Olympic website. Since then data distribution has been evolving till today and this real-time delivery of data to any device in the world. Having this in mind and looking at the exponential evolution of technology, which are going to be the main IT innovations in future Games? I suggest a reading to Atos Ascent Magazine Innovation in Sport (https://atos.net/content/dam/global/olympic-games/atos-ascent-vision-sport-and-technology-2013.pdf) with the top trends for 2020 around IT and sport.

Would it be possible not only to get real time data but to compete in your console in real time from your sofa?

For Business Technologists, as for Bobsleigh champions, teamwork is the key to success.