A matter of life & death

It can currently take more than 10 years to bring a new medicine to market. Andrew Shields investigates how digitalization could help speed up the process, enabling a faster response to crises such as the major Ebola outbreak that struck west Africa in 2014

Bringing a new drug to market is a slow, costly and high-risk process. It typically takes 10 to 12 years to launch a safe and useful medicine, with up to half of that time spent conducting clinical trials.

The potential markets are, of course, huge. Four hundred million people suffer from diabetes, for example, with only one-quarter of that number receiving regular treatment. Nor is an entire market really covered: 11 per cent of the world's population live in Africa but carry a quarter of the global disease burden.

Yet there are blockages right along the drug pipeline. According to a report by eMedonline, only six per cent of clinical trials are completed on time and seven out of ten run more than a month over schedule. Low rates of adherence among patients receiving treatment for some chronic conditions make it harder to demonstrate the benefits of a drug, while the cost of patients dropping out can run into millions. eMedonline claims that it costs more than $6,500 to sign up a patient for a trial - and three times as much to find a replacement if the original candidate withdraws. Each day a drug is delayed from reaching the market, the sponsor loses up to $8 million.

Out of 10,000 compounds in drug discovery, five make it into clinical trials and only one will be finally approved, at a typical cost of around $1 billion. The benefits of a more streamlined clinical trial process are clear if companies are to maximize their return and gain a competitive advantage, says Markus Fuchslocher, Head of Pharmaceutical Industry at Atos. Yet the pharmaceutical industry has been slow to embrace the potential of digitalization in terms of developing new drugs more quickly, at a reduced cost, based on insight from higher-quality data.

From concept to consumer

After submitting a patent, a company has 20 years to recoup its investment and make a profit before generic medicines enter the market and the price drops by up to 80 per cent. However, research and development typically takes 10-12 years, dramatically reducing the time available to earn money - not forgetting the ever-present risk of an adverse finding resulting in a product being recalled. 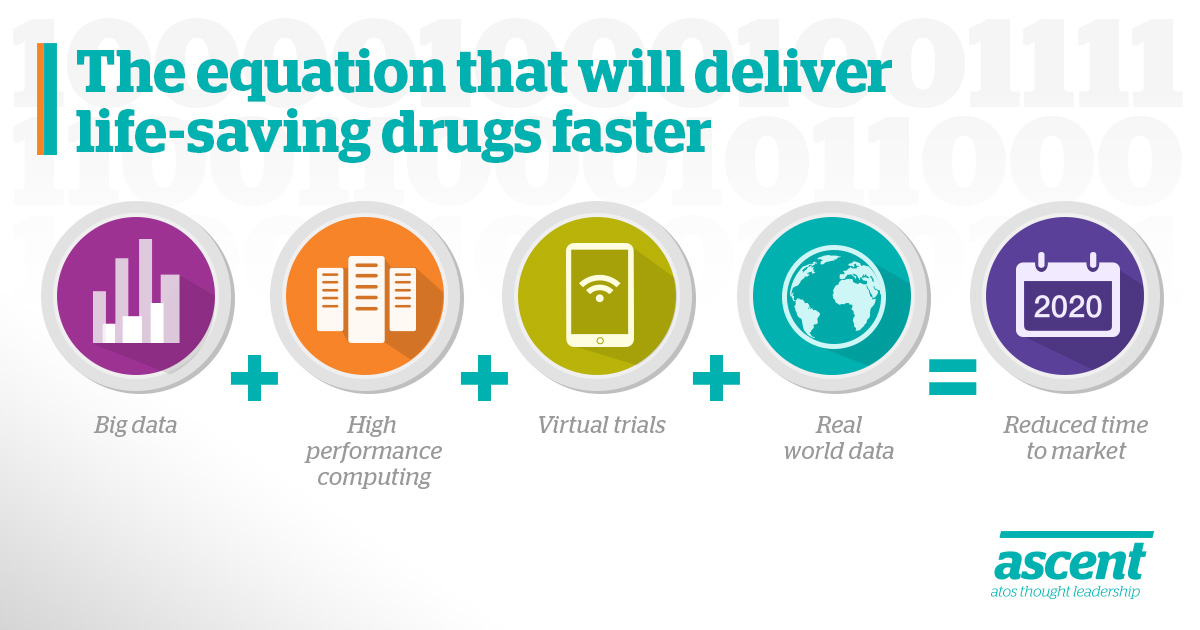 2 YEARS: Phase 2: checking for efficacy in patients with targeted disease.

4 YEARS: Phase 3: the most complex phase, using thousands of real patients to confirm the findings and compare the drug to those on the market or placebos. This phase is inevitably the most at risk from attrition and delay.

"There is massive potential for High Performance Computing (HPC) and Big Data to better identify potential new targets and develop them more quickly into effective and approved medicines," says Fuchslocher. "This starts with screening existing research papers related to a specific condition during the discovery phase. We have already seen cases where analysis of ten thousand papers identified five to ten new targets in weeks when previously this would have taken months or even years."

During the trial phases, digital genome analysis using HPC could target specific populations so trials are smaller, shorter, less expensive and more powerful. Then, when a new drug is moving towards the market, Big Data analysis on anonymised data will reveal its true worth compared to those already existing and feed into added-value pricing strategies.

Fuchslocher points to virtual clinical trials, in which health KPIs are collected at point of care, as another effective way to speed up the process and secure better-quality data: “Sensors and medical devices provide consistent monitoring and automatic transmission of data – in real time. Reliable data has a major impact on the duration and cost of trials.

“Virtual trials will also speed up the recruitment process as both physicians and patients may be more willing to participate if there is less need for direct interaction, especially in countries where the physician is hundreds of kilometres away.”

According to Nadia Foskett, Principal Real World Data Scientist at Roche, real-world data collected outside clinical trials play an important part in bringing drugs to market more efficiently. Real-world data includes, for example, data stored in electronic health records or collected in observational studies. This can be used to understand disease burden and treatment patterns, optimize trial designs and recruit for randomized studies, or inform the benefit-risk profile of drugs. Data collected reflecting the clinical practice of treatment options are useful for patients and their families, health care professionals, regulatory and reimbursement agencies as well as policy makers concerned with healthcare provision.

Real-world data are collected and stored in many different forms. Using them more efficiently and systematically to advance patient care is one of the biggest tasks faced by researchers and policy makers. The challenges to be tackled are privacy concerns, heterogeneity of IT platforms and software solutions, ownership and funding sources, data quality and completeness, to name just a very few. However, given the insights to be gained, investing into these efforts, also as a pharmaceutical company, is important.

What happens, though, when a trial doesn’t run according to plan? Fuchslocher highlights the potential benefits of Big Data analysis in this situation: “Many trials are not stopped until very far into the process, so the risk of late-stage flops is prevalent. Phase three can represent up to 50 per cent of the total cost, so the sooner a failing trial can be stopped, the better. Big Data may give clues much earlier.

“By taking advantage of Big Data analysis, pharmaceutical companies can become more innovative and efficient, especially through the clinical trials process. They can learn from the retail and banking sectors about engaging more effectively digitally with the end-user. And by using technology to set up virtual trials and pressing for more open data to be available, they can unblock stagnant pipelines.”

Clinical trials are, with good reason, carefully regulated to ensure only drugs that are proven safe and effective reach consumers. However, regulators such as the US Food and Drug Administration (FDA) are keen to consider the benefits of digitalized processes that retain rigour but potentially reduce time to market. As reported in a trade magazine, Janet Woodcock, Director of the FDA’s Center for Drug Evaluation and Research, said: “Modernisation of clinical trials is a key initiative of the FDA”.

The end result will be what the pharmaceutical industry most wants: to save more lives more quickly and help more people live well.