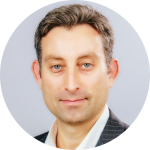 Advances in digital technology and the way in which these are reshaping how government interacts with citizens continue to rise up the political agenda. Our latest paper – Digital Vision for Digital Britain – which was launched in Parliament this month, takes a view across sectors and sets out the scale of digital transformation taking place across the UK economy and society. Another recent publication, our Digital Vision for Mobility focuses on how digital transformation is changing personal mobility, road, rail and logistics.

In the area of Artificial Intelligence, we were delighted to host the All-Party Parliamentary Group on AI at Atos’ London offices to see how quickly this technology is developing and the benefits AI can offer to society’s most pressing challenges. We have also recently hosted the first in a series of AI + Ethics roundtables in Parliament, focused on how we can deliver ethical AI for the benefit of citizens.

You can also read an update on why we have been ranked as a Times Top 50 Employer for Women and how Atos has offset 100% of our global C02 emissions, through our global environmental programme.

Digital Vision for Digital Britain launched at House of Commons 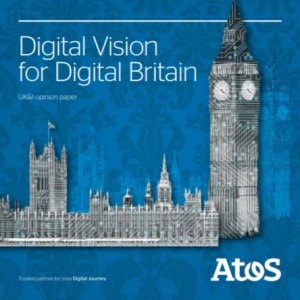 Atos UK&I recently launched the Digital Vision for Digital Britain opinion paper, which explains how new connected technologies including AI, machine learning and the Internet of Things are beginning to transform everyday life in the UK, offering new ways to meet society’s most pressing challenges, including increasing economic opportunity, supporting an ageing population and social mobility.

Adrian Gregory, Senior Executive Vice President and CEO Atos UK&I said: “Digital transformation is integral to the UK’s social and economic future. Technological innovation is a centrepiece of the Government’s Industrial Strategy to increase the prosperity of people throughout the UK through investment in skills, industries, and infrastructure. This paper sets out how we can help the effective design and delivery of services for organisations in the public and private sectors, as they respond to a new era of opportunity and change in the UK.” 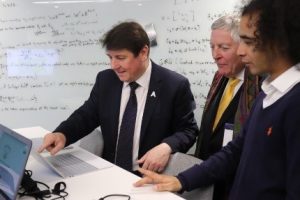 On Monday 4 March, Atos UK&I headquarters played host to members of the All-Party Parliamentary Group on Artificial Intelligence (APPG AI), who witnessed first-hand how AI technology is helping deliver solutions to some of society’s most important challenges.

The five Parliamentarians, including APPG co-chairs Stephen Metcalfe MP and Lord Clement-Jones, heard from Atos experts and were given a tour of Atos’ state-of-the-art AI Lab.

This is the first of three Labs in Europe and North America dedicated to delivering easy access for organisations to drive enterprise transformation and opportunity through AI technology. The APPG members were also briefed on how AI is already helping to predict hospital patient discharge times and supporting the police by predicting where crime ‘hotspots’ are likely to emerge.

Kulveer Ranger, Global Head of Strategy & Comms FS&I, SVP – Strategy & Communications, Atos UK&I, said: “We recognise the importance of sharing the potential and current application of AI technology, and demonstrating how we are working in partnership with other organisations who will design and deliver future AI-driven services. AI is fast becoming a critical enabler in providing innovative services and products across the public and private sectors, and we were delighted to share specific, current examples with members of the All-Party Parliamentary Group on AI.” 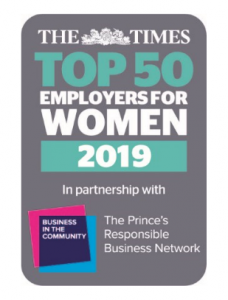 In May, Atos UK&I was named as a 2019 Times Top 50 Employer for Women in the UK, in recognition of our work in the areas of recruitment, retention and progression, diversity and inclusion, monitoring and accountability.

We have taken a number of steps to improve our gender diversity, within the context of an industry where male representation has traditionally formed the workforce majority.

This has included implementing targets to increase representation of women across all levels of the company – from graduate to board membership – alongside a greater focus on succession planning and internal promotion, introducing extensive family-friendly policies and benefits and senior leaders working as sponsors for women wishing to develop their careers.

In addition, our diversity and inclusion network, AtosAspire, continues its work aimed at getting “gender on the agenda”. The network, which has over 700 members in the UK, aims to do this by recognising, developing and raising awareness around diversity and inclusion in the workplace, making Atos the leading employer in this area in the technology sector.

This holistic approach, implemented by Atos at global and local levels, is focused on providing a supportive environment in which women can flourish and fulfil their career aspirations.

Adrian Gregory, SEVP and CEO UK&I, says: “We are honoured to be listed for the first time in The Times Top 50 Employers for Women in the UK. This is a great recognition of Atos’ efforts to progress gender equality in our organisation and to foster an inclusive culture throughout our business. We believe that a more inclusive workplace will get the best from our people and we are proud to support everyone to strive and develop within Atos.”

The Digital Vision for Mobility report is launched 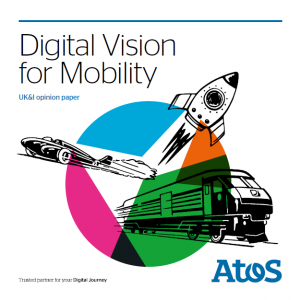 Atos’s new Digital Vision for Mobility opinion paper, launched at the beginning of June, sets out how digital technology has transformed the UK’s transport sector over the past 30 years and considers what consequences disruptive forces such as AI and automation might have on the industry going forward.

The report – which features contributions from subject matter experts across the sector – details how the UK is witnessing a digital revolution in mobility, creating new business models, disrupting trends in personal mobility and reshaping global supply chains. It also addresses the opportunities presented by technological advances and the challenges faced by governments, transport providers and individuals as they navigate the ethical implications of this new data-driven environment.

Speaking on the release of the paper, Kulveer Ranger, SVP, Head of Strategy, Marketing, Comms & Public Affairs, Northern Europe & APAC, said: “We are proud to showcase Atos’ formative role shaping the history of UK transport through evolution of core systems and innovative technological solutions in a crucial area for the country’s social and economic development. However, this is only the beginning of our mobility journey: the direction of travel will now be driven by the power of data, digital platforms and aggregation, creating efficiency, speed and exciting sustainable options for us all to select from.”

On 21 May, Atos hosted the first in a series of roundtables in Parliament on the subject of AI and ethics entitled ‘Trusting AI: What’s inside the black box’. Contributors to the policy discussion included representatives from Parliament, the think tank Reform and techUK, as well as a number of tech SMEs including Monzo and larger companies such as PwC, who all offered unique perspectives on some of the challenges and opportunities associated with this technology.

The discussion considered how the UK can remain a leader in AI, how confident consumers are with AI and how citizens can benefit from the technology. The discussion also focused on what steps need to be taken to promote accountability, privacy and security in the application of AI.

Partnering with the think tank Onward and engaging other prominent organisations, we are planning to follow this event with a series of discussions, designed to highlight further aspects of the debate around the use of AI. This will culminate during the party conference season in a fringe event under the banner of ‘AI: Could we? Should we?’, where a paper from Onward, supported by Atos, will be launched.

Speaking at the recent roundtable event, Kulveer Ranger, SVP, Head of Strategy, Marketing, Comms & Public Affairs, Northern Europe & APAC said: “It was tremendous to draw together such a diverse array of talented and engaged voices from across politics, public policy and leading practitioners in AI. This first discussion highlighted the critical need to demystify AI and focus on the benefits and opportunities that the technology can deliver to enable greater trust from the public on the premise that AI can and will be a force for good.” 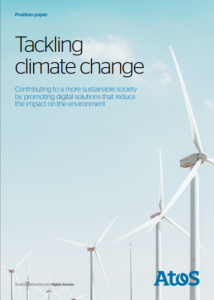 On 18 April, Atos were pleased to announce that we had successfully offset 100% of our 2018 worldwide CO2 emissions through a dedicated wind farm programme. In addition to offsetting emissions from data centres, which we have done since 2014, our global environmental program now also ensures the neutralising of carbon emissions produced by offices and business travel.

As part of our effort to tackle climate change, Atos is working continuously to reduce our environmental footprint through the implementation of multiple environmental initiatives, including modernising our data centres, increasing the use of renewable energy sources and improving our overall energy efficiency.

To negate our CO2 emissions from all activities, Atos has invested in three wind farms located in India. The project, which was started in 2010 across three states (Karnataka, Gujarat and Maharashtra), promotes the use of renewable energy and has led to the installation of 137 wind turbine generators, producing 109.6 megawatts, enough to power approximately 40,000 rural households.

And it doesn’t stop there. Over the long-term, Atos’ carbon reduction targets have been approved by the Science-Based Targets initiative (SBTi).

Going forward, Atos will also be supporting other businesses in their journey towards more sustainable operations, for example through allowing our clients to report “ZERO” in their own carbon reporting for the solutions they host in our datacentres.

From the cloud to the edge – introducing computing’s next generation 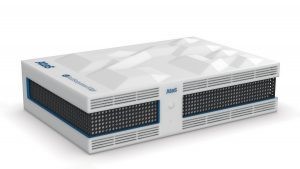 The rise of cloud computing has been one of the defining trends of the past ten years; it has enabled services that have become commonplace in the lives of individuals and organisations, from WhatsApp and Spotify to email and file sharing – all hosted away from individual devices and accessible anywhere, any time.

By 2025, however, the vast majority of the data we generate will not be created by humans, but by sensors, robots, drones, cars and a myriad of other connected devices – known as the Internet of Things (IoT). Edge computing is the new technology that is stepping in to deliver on the unique demands of a hyperconnected data ecosystem.

Edge computing enables the processing of vast volumes of information “at the edge” of the network – i.e. locally, close to where the data is created, rather than at remote data centres. This is important in environments where response times are critical – such as autonomous vehicles – and also enables embedding AI securely into local systems – for example, by equipping groups of devices (wind farms, production lines and even traffic control) to respond quickly to changes in the local environment.

Atos is leading the way in the edge computing revolution, with the recent release of its BullSequana Edge – the highest-performing edge computing server on the market worldwide – and will continue to help organisations in the public and private sectors to benefit from cost-effective and secure data processing at the edge.

Thierry Breton, Former Chairman and CEO of Atos, said: “The rise of cloud computing has been one of the defining trends of the past ten years – and it is projected to keep growing rapidly in the next ten. But in the meantime, the explosion of the Internet of Things will redefine the way data is created and processed – so much so that, by 2025, 80% of our data will actually be processed outside of the cloud and data centres, compared to 20% today.”

More information on the launch of The BellSequana Edge can be found here.