Atos provides Bundeswehr with automated reconnaissance for its “glass battlefield”

Munich, Germany, December 20 2021 - Atos today announces that it is developing the central prototype for a research study entites "ErzUntGlas" (a new generation of a transparent battlefield to support dynamic operations) for the German Armed Forces. The live demonstration, which took place at the end of November in front of a large and international audience with representatives from the Army was well received. Together with partners KMW, Rafael and Aeronautics, Atos showed how tactical cooperation between soldiers and drones in an automated swarm formation can significantly accelerate and improve the reconnaissance process in a highly dynamic battlefield.

The drones enable automated reconnaissance: they are centrally coordinated and controlled via a swarm control system developed by Atos and create a digital situation picture of the battlefield. The automated detection and identification of objects in the imaging sensor (IR/VIS), such as vehicles and people, is carried out by AI modules integrated into the drones. Once an object has been detected, this information is processed locally in the drone and integrated into the situational image as an event-driven message in near real-time.

Günter Koinegg, Head of Public Sector & Defense Central Europe, Atos says: "We are proud to support the Bundeswehr with groundbreaking, innovative technology. Together with our partners, we improve reconnaissance missions and enable seamless cooperation between all parties involved.”

In addition to testing the tactical capabilities of unmanned reconnaissance, the system will make it possible to develop the basis for safe drone flight and the development of extensive training areas. At the core of this is a drone traffic management system (UTM). Via the UTM access, the drone operations center in the control center monitors the airspace and is informed about all relevant flight activities. It can use this to manage a highly automated drone swarm operation.

The seamless transfer of situational information into an Army command and control system is carried out via a connection to Sitaware Frontline from Systematics. The ErzUntGlas system is based on the open architecture of the Atos Trusted Service Mesh (TSM) technology. It enables additional software applications and software from other specific systems (e.g. command and control systems, sensor-to-shooter, joint-fire support, communication systems, etc.) to be connected.

In addition, to improved automated reconnaissance, Atos and its partners also demonstrated how a combat process can be significantly accelerated: the sensor-to-shooter system Fireweaver from the company Rafael and the drones from the company Aeronautics were used as autonomous sensors. The central mobile control station for planning and controlling the missions as well as for situational processing was integrated into a mobile military command post from the company KMW and a mission was simulated.

The basis of the digital information transmission and tactical collaboration (audio, video, data) within the highly dynamic scenario was the robust, high-performance Mobile Ad-hoc Network (MANET) in UHF and S-band based on BNET Software Defined Radio (SDR) radio systems from Rafael. In the presentation, the system was able to illustrate the live transmission of video streams from the drone sensors via the MANET of the tactical radios, even under interference (ECM, jamming) and in motion.

By 2023, the ErzUntGlas system will be further optimized under operational conditions, also in coordination with the developments in the digitalization of land-based operations, and further developed to maturity level TRL (Technology Readiness Level) 6. The target system will then be deployed. 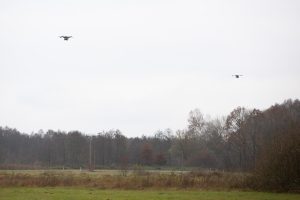 Drones during demonstration flight as part of the research study "ErzUntGlas" (generation of a glass battlefield to support dynamic operations), at the Bundeswehr site in Manching. Source: Atos 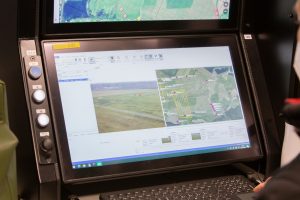 The planning and control of drone systems enables the field of operations to be displayed dynamically. Source: Atos

Atos is a global leader in digital transformation with 107,000 employees and annual revenue of over € 11 billion. European number one in cybersecurity, cloud and high performance computing, the Group provides tailored end-to-end solutions for all industries in 71 countries. A pioneer in decarbonization services and products, Atos is committed to a secure and decarbonized digital for its clients. Atos is a SE (Societas Europaea), listed on Euronext Paris and included in the CAC 40 ESG and Next 20 Paris Stock indexes.